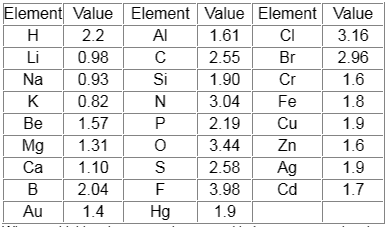 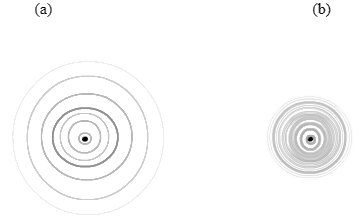 Li atom is much larger than F (atom's sizes decreases along a period (row) in the periodic table due to increased nuclear charge). This is clearly reflected in the charge densities of separated Li and F in fig 1 (a) and (b). When Li and F approach up to a distance of 13.9 a0 ,Li ....F- is more stable than Li....F at the same distance. An electron from Li is captured by F, the electron density of F- grows and that of Li shrinks drastically. When the molecule LiF is finally formed, the "small" electron cloud of Li is "captured" into the spherical cloud of F-. The molecular shape is closer to a spherical shape than to an elliptical shape (homonuclear cases). This discussion brings out an important feature. Molecules as well as their bonds need to be described in terms of their charge densities and writing the bonds as H - H or Li - F is a very crude representation. In the interaction between molecules, it is the charge densities that play a central role, and not the lines drawn between atoms!

We have studied in detail the previous lecture the shapes, sizes and contours of MOs of homonuclear diatomics. The main difference in heteronuclear diatomics is the "distortion" or the "tilting" of electron clouds towards the electronegative atoms. The bond in LiF has been shown in fig 1(d) to be polarised towards the F atom. The bonds formed by the sideways overlap of p- orbitals will also show the same distortion. The bonds in CO are sketched in fig 1 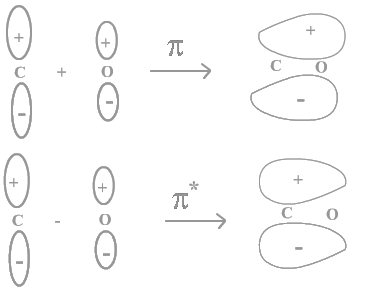 The other common heteronuclear diatomics are hydrogen halids and alkali halides, oxides and sulphides of elements of group II A, and other common gases such as NO, CO etc. There is hybridization in the valence orbitals of each of the participating atom. This not only yields stronger and more directed bonds, but helps in the bonding of these diatomics to other species such as metals or surfaces. We will illustrate this with the example of carbon monoxide (CO).