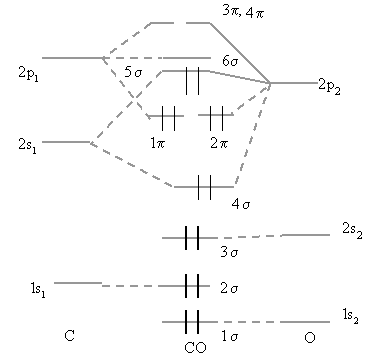 Fig 1 a) Orbital energy correlation diagram in CO without hybridization.

The 1s orbital of O and the 1s orbital of C are very close to the nuclei and have very low values of energy and hence do not participate in bonding at all. The 2s orbital of O is also very low lying and does not take part in bonding. In a molecule, all atomic orbitals get converted to molecular orbitals. The inner orbitals may remain 99.999% "pure", but there will be a miniscule participation of other atoms converting them to MOs. This all orbitals in a molecule will be labeled as , and so on. The first two orbitals 1 (from 1s of O) and 2 (1s of C) hardly contribute to bonding and so their energy levels remain unchanged in the molecule.

So far, we have taken care of 1s and 2s orbitals of C and 1s, 2s and one 2p, say 2pz of O. The two other 2p orbitals of O, say 2px and 2py orbitals of C to give two bonding MOs (1 and 2) and two antibonding MOs (3and 4) which are higher in energy. The 2pz orbital of C has no counterpart in O to bond with and hence it remains a non bonding orbital (6). This diagram, which shows how the MO energy levels relate to the energy levels of the AOs of the atom is called a correlation diagram. The electronic configuration of CO will then be 1 2 22 32 42 1 2 22 52. This takes care of all the 14 electrons in CO.

There are no electrons in the 6, 3 and 4 levels. The highest occupied molecular orbital is 5 , which has a dominant contribution from the 2pz orbitals of oxygen. In an MO, the AO whose energy level is closer to the MO energy level, contributes to a greater extent (> 50 %) to the MO. In this model where hybridization is not invoked, the participating AO "pairs" such as 2s1 and 2p2 and 2p1 and 2p2 are not very close in their energy values) and hence the binding resulting from such overlaps is not very strong.

What has happened as a consequence of hybridization is that the energy level h1 (of C) has come very close to the energy of h4 which is the hybrid in the oxygen atom. The hybrid orbitals h1 and h4 together form a strongly bonding MO, 4 and a highly antibonding MO, 6. The hybrid orbitals h3 (of O) and h2 (of C) remain non-bonding. The energies of the orbitals take on the same values as in the unhybridized case. Although the electronic configuration in 1 (b) remains the same in case of CO as in the unhybridized case (1(a)), there are two crucial differences between these. One is that the bond order in the unhybridized CO is 2 while it is 3 in hybridized CO.

The binding energy in CO is -256 kcal /mol while the binding energy in N2 is -240 Kcalmol - 1. CO is one of the strongest diatomics and the strength can be only explained using hybridization. The higher binding in CO (relative to N2) is due to electronegativity differences between C and O and the consequent differences in the MO energy levels.The second difference is that the highest occupied MO (HOMO) in the unhybridized case is dominantly an oxygen orbital (mainly oxygen 2p with some contribution from carbon 2s) whereas the HOMO in the hybrided CO is a nonbonding hybrid on C, which is mainly an atomic orbital. This lone pair of the outermost orbital of C is available for donating ("coordinate" bond) to electron deficient sites such as metal carbonyls. It is experimentally found that in metal carbonyls, CO binds to metals from the carbon end rather than the oxygen end (even though oxygen is more electronegative).

It should be apparent even from one example such as this as to how important and wide ranging the concept of hybridization is in chemistry. We will have more on this in the next chapter. While closing this lecture, you may be wondering how the energy levels such as the ones in fig 1(a) and fig 1 (b) are obtained. These are all obtained as solutions of the Schrödinger equation for the molecule.

It is only from the coefficients of the AOs in the MO that we can conclude that there is hybridization. The energy of hybrid h1= 0.8 (2s) 0.6 (2p) is

Orbitals can neither be created nor destroyed! The other thing that you might be wondering is s whether you can understand molecules using MOs alone. There is another approach called the valence bond approach (which uses electron pair [valency!] functions or non-linear combination of atomic orbitals to begin with) but that is perhaps more complicated to introduce than the MO approach. However, both approaches or theories give the same results which agree closely with experimental energy levels of most small molecules.