Since pH is actually defined in terms of hydrogen ion activity and not its concentration, a hydrogen electrode allows a direct measure of {H } and thus of –log {H }, which is the pH.

Although this arrangement (in which the reference electrode could be a standard hydrogen electrode) has been used for high-precision determinations, it would be impractical for routine pH measurements of the kinds that are widely done, especially outside the laboratory.

The glass electrode for pH measurements:

In 1914 it was discovered that a thin glass membrane enclosing a solution of HCl can produce a potential that varies with {H } in about the same way as that of the hydrogen electrode. Glass electrodes are manufactured in huge numbers for both laboratory and field measurements. They contain a built-in Ag-AgCl reference electrode in contact with the HCl solution enclosed by the membrane. 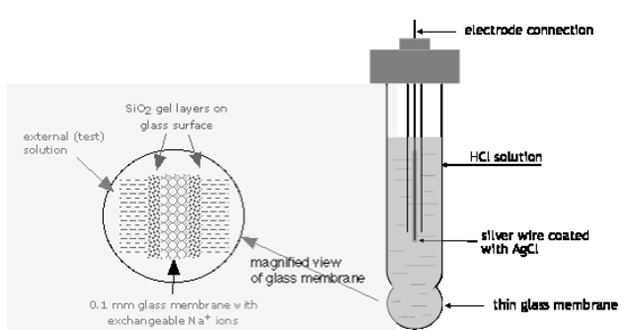 The potential of a glass electrode is given by a form of the Nernst equation very similar to that of an ordinary hydrogen electrode, but of course without the H2:

The reason a glass membrane would behave in this way was not understood until around 1970. It now appears that hydrogen ions in the external solution diffuse through the glass and push out a corresponding number of the Na ions which are normally present in most glasses. These sodium ions diffuse to whichever side of the membrane has the lower concentration, where they remain mostly confined to the surface of the glass, which has a porous, gelatinous nature. It is the excess charge produced by these positive ions that gives rise to the pH-dependent potential.

The function of the membrane in the glass electrode is to allow hydrogen ions to pass through and thus change its potential, while preventing other cations from doing the same thing (this selectivity is never perfect; most glass electrodes will respond to moderate concentrations of sodium ions, and to high concentrations of some others.) A glass electrode is thus one form of ion-selective electrode. Since about 1970, various other membranes have been developed which show similar selectivities to certain other ions. These are widely used in industrial, biochemical, and environmental applications.