Inductive and Resonance Effects:
To make sense of the σ values, we need to look in more detail at how substituents can stabilize a developing positive or negative charge. Two factors are involved. The more obvious is the effect of the electronegativity of the substituent. Carbon and hydrogen have similar electronegativities, so C-H and C-C bonds in neutral saturated organic molecules are non-polar. Carbon becomes more electronegative in CH3 as it changes its hybridization and acquires a positive charge. If one hydrogen is replaced by a fluorine atom, the electronegative fluorine atom will polarize the sigma bond so that, relative to the C-H bond, the electron density will be centred closer to the fluorine, and away from the C . This will build up the positive charge on the carbon and destabilize the ion. Conversely, groups such as alkyl groups can (relative to hydrogen) release electrons and stabilize a carbocation. This effect is called the Most of the common groups found in organic compounds are centred on elements which are more electronegative than carbon, and therefore tend to withdraw electrons inductively. The effect falls off sharply with distance.

The second and often more powerful influence is the resonance or delocalization effect. For any molecule for which more than one electronpair bond “structure” can be written, the true structure will be intermediate between these “structures” and the molecule will be more stable than expected. Well-known examples include benzene (Figure 1a) and charged structures such as the ally1 cation (Figure 1b). A carbocation can be stabilized either by an adjacent lone pair, which can be donated to form a double bond (Figure 1) or by donation of electrons from an adjacent multiple bond (Figure 1b). Anions can be stabilized by donation of the lone pair to an adjacent multiply bonded atom (Figure 1d).

Resonance effects are frequently opposed to the inductive effect. The methoxy group is a striking example. The oxygen atom will withdraw electrons inductively but release them from its lone pair by resonance. The inductive effect predominates at the meta position, but the resonance effect predominates at the para position. Why is this? The inductive effect falls off with distance, so we should expect that the inductive withdrawal of electrons by the methoxy group should be somewhat less at the para position (though still in the same direction). The resonance effect, on the other hand, will release electrons and produce negative charges at three locations on the benzene ring, as shown in Figure 2. For the meta substituents, none of these positions is adjacent to the carboxylate anion group, but for thepara substituent, one of the negative charge positions is adjacent to the carboxylate anion as shown: this will destabilize the anion and outweigh the inductive withdrawal of electrons, giving a net negative σ value. 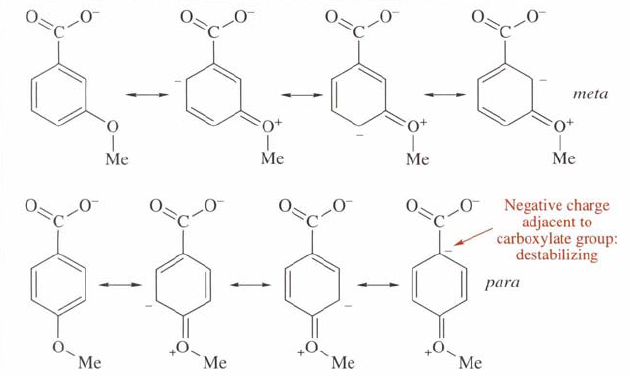 The halogens also show inductive withdrawal of electrons and conjugative release. The release is greatest for fluorine in spite of its electronegativity. Being a first-row element, its size is similar to that of carbon, and overlap between its lone pair orbital and the neighbouring carbon p orbital is therefore greater than for chlorine. However, unlike the methoxy group, the resonance effect at the para position does not quite outweigh the inductive effect. The dimethylamino group shows the greatest difference between aparaan d urnetNai.t rogen, being more electropositive than oxygen, more readily accommodates a positive charge, so resonance from structures analogous to those shown in Figure 1(c) will be more effective. The C02Et, CN and NO2 groups all have resonance effects in the same direction as the inductive effect; accordingly, the positive u values at the meta positions are enhanced at the para position by the extra resonance contribution.
Finally, we consider the methyl substituent. The very slightly negative (T value at the meta position indicates that, relative to hydrogen, the methyl group releases electrons inductively to a neighbouring carbon atom. The more negative value at the para position indicates a conjugative release as well; this is surprising because the group is saturated and there is no lone pair to donate electrons. The effect is explained in terms of hyperconjugationThe alternative structure shown in Figure 1(e) is thought to contribute to the overall structure of a methyl group attached to a sp2 hybridized carbon atom.

Thus from the experimentally obtained acidities of benzoic acids with a particular substituent at the meta and para positions, we obtain insight into the inductive and resonance effects for that substituent.