Optical isomerism:
Optical isomerism is shown by the compound containing at least one chiral carbon atom (asymmetric). Optical isomers rotate the plane of polarised light. Generally, a chiral carbon atom is one that is attached to four different atoms or groups. Simple test of determining chirality of a three dimensional molecule is non-superimpossibility of its mirror images (Fig. 2). Polarized light is a light beam in which all the waves are vibrating in the same plane. 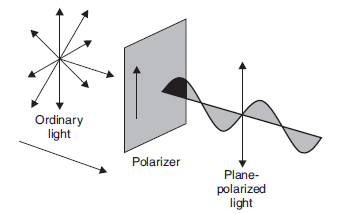 Light is plane-polarized after passing through a sheet of Polaroid. Optical isomers rotate the plane of polarized light.

Two optical isomers of lactic acid (Fig. 2) are molecules with no centers, axes or planes of symmetry. Asymmetric molecules are chiral and can exist in distinct mirror image forms, giving rise to optical isomerism. Any carbon atom with four different groups or atoms attached to it is asymmetric

7.8 (a) The mirror image forms of lactic acid

If we translate the three-dimensional molecule to a two-dimensional figure, we get Fischer projection formula of the molecule.

Then the test of chirality is very simple. If we rotate Fischer projection formula of one molecule on the plane of the paper by 180° none of the configurations arrived at which is superimpossible on the other. These types of molecules rotate plane of polarised light (see Fig. 7.6) either right or left. The two configurations of lactic acid rotate plane of polarised light in the same degrees but in the opposite directions. These two forms of stereoisomers (configurations) are known as enantiomers.