Couple and Moment of a Couple

Couple and Moment of a Couple: It is demonstrated how the resultant R of two parallel forces F1 and F2 can be found (Fig. 1). As a first step, the two forces K and −K, which have the same line of action, are added. Since they are in equilibrium they have no effect on a rigid body. Then two parallelograms (here rectangles) are drawn to obtain the forces R1 = F1 K and R2 = F2 (−K). These forces, which are statically equivalent to the given system of parallel forces, represent a system of concurrent forces. They may be moved along their respective lines of action (sliding vectors!) to their point of intersection. There another parallelogram of forces is constructed that yields the resultant 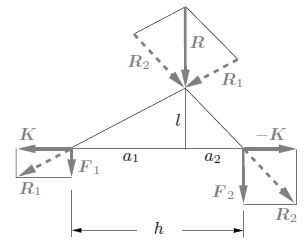 This graphical solution yields the magnitude R of the resultant as well as the location of its action line. From Fig. 1 it can be found that

Thus, the magnitude of the resultant R of the parallel forces is simply the algebraic sum of the magnitudes of the forces. Equation (2) also yields the principle of the lever by Archimedes

Hence, the method described above always gives the resultant force and the location of its action line unless the denominator in (4) is zero. In this case the two forces are said to form a couple. 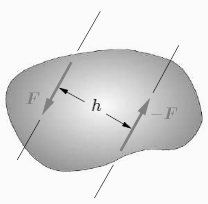 A couple consists of two forces having equal magnitude, parallel action lines and opposite directions (Fig. 2). In this case the method to find the resultant fails to work. With F2 = −F1 the equations (2) and (4) lead to R = 0 and a1, a2 →±∞. Hence, a couple can not be reduced to a resultant single force. Although the resultant force of a couple is zero the couple has an effect on the body on which it acts: it tends to rotate the body. Fig. 3 shows three examples of couples: a) a wheel which is to be turned, b) a screw driver acting on the head of a screw and c) a “clamped” beam whose free end is twisted. As can be seen, a couple has a sense of rotation: either clockwise or counterclockwise. Similar to the notion of a “concentrated” force the couple is an idealization which replaces the action of the area forces. We now investigate the quantities which define a couple and its properties. The effect of a couple on a rigid body is unambiguously determined by its moment. The moment incorporates two quantities: first, its magnitude M which is given by the product of the perpendicular distance h of the action lines (Fig. 2) and the magnitude F of the forces M = hF................... (5) 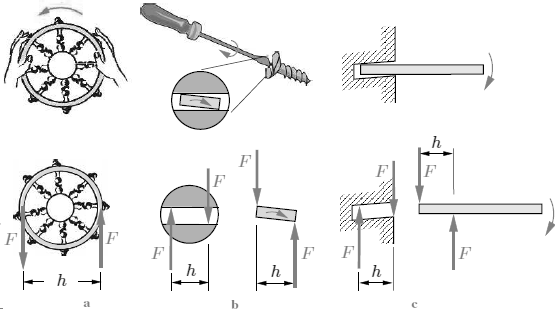