Equilibrium of bodies I

Equilibrium of bodies I: In the static part when we say that a body is in equilibrium, what we mean is that the body is not moving at all even though there may be forces acting on it. (In general equilibrium means that there is no acceleration i.e., the body is moving with constant velocity but in this special case we take this constant to be zero).

are the forces applied on the point particle (see figure 13) 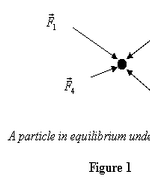 That is all there is to the equilibrium of a point particle. But in engineering problems we deal not with point particles but with extended objects. An example is a beam holding a load as shown in figure 2. The beam is equilibrium under its own weight W , the load L and the forces that the supports S1 and S2 apply on it. 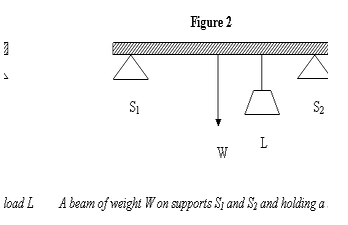 To consider equilibrium of such extended bodies, we need to see the other effects that a force produces on them. In these bodies, in addition to providing acceleration to the body, an applied force has two more effects. One it tends to rotate the body and two it deforms the body. Thus a beam put on two supports S1 and S2 tends to rotate clockwise about S2 when a force F is applied downwards (figure 3). 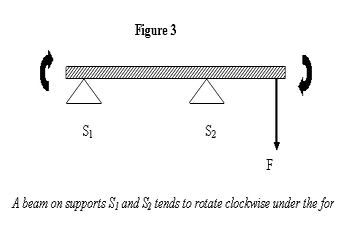 The strength or ability of a force F to rotate the body about a point O is given by the torque Tgenerated by it. The torque is defined as the vector product of the displacement vector r0 from O to the point where the force is applied. Thus

We now make a subtle point about the tendency of force to rotate a body. It is that even if the net force applied on a body is zero, the torque generated by them may vanish i.e. the forces will not give any acceleration to the body but would tend to rotate it. For example if we apply equal and opposite forces at two ends of a rod, as shown in figure 5, the net force is zero but the rod still has a tendency to rotate. So in considering equilibrium of bodies, we not only have to make sure that the net force is zero but can also that the net torque is also zero.