Let us analyze what happens in these cases when a load is applied. Let us look at the built-in support. 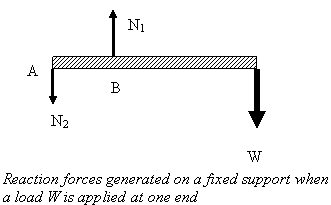 As the load is put on, the beam will tend to move down on the right side pushing the inner side up. This will generate reaction forces as shown schematically in figure 2. The generated forces can be replaced by a couple and a net force either about point A or B as follows (see figure 3). Add zero force N1 -N1 at point A then the original N1 and -N1 give a couple and no force and there is a net force ( N1 -N2) at A. 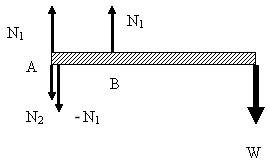 We could instead have added a zero force N2 - N2 at B and then would have obtained an equivalent system with a different couple moment than the previous case and a net force (N1 - N2) at B. I leave this for you to see. You may be wondering by now at which exactly does the force really act and what is the value of the couple. Actually in the present case the two unequal forces act on the beam so the torque provided by them is not independent of the point about which it is take. In such cases, as we will learn in the later lectures, the force effectively acts at the centroid of the force and the couple moment is equal to the torque evaluated about the centroid. In any case we can say that a built-in support provides a couple and a force. We give the schematic picture above only to motivate how the forces and the couple are generated. In reality the forces are going to be distributed over the entire portion of the support that is inside the wall and it is this distribution of force that provides a net force at the centroid and a couple equal to the torque calculated about the centroid, as we will see in later lectures. Note that deeper the support is fixed into a wall, larger would be the couple provided by it. Hence whereas to hang a light photo-frame or a painting on a wall a small nail would suffice, a longer nail would be better if the frame is heavy. In addition to providing a force perpendicular to the support and a couple, a fixed support also provides a force in the direction parallel to itself. Thus if you try to pull out the support or try to push it in, it does not move easily. The forces and couple provided by a fixed support are therefore as shown in figure 4.