Free Body Diagram:In talking about the equilibrium of a body we consider all the external forces applied on it and the interaction of the body with other objects around it. This interaction produces more forces and torques on the body. Thus when we single out a body in equilibrium, objects like hinges, ball-socket joint, fixed supports around it are replaced elements by the corresponding forces & torques that they generate. This is what is called a free-body diagram. Making a free-body diagram allows us to focus our attention only on the information relevant to the equilibrium of the body, leaving out unnecessary details. Thus making a free-body diagram is pretty much like Arjuna - when asked to take an aim on the eye of a bird - seeing only the eye and nothing else. The diagrams made on the right side of figures 1, 2 and 3 are all free-body diagrams.

In the coming lecture we will be applying the techniques learnt so far to a very special structure called the truss. To prepare you for that, in the following I consider the special case of a system in equilibrium under only two forces. For completeness I will also take up equilibrium under three forces.

. Further, if the forces are not along the same line then they will form a couple that will tend to rotate the body. Thus

implies that the forces act along the same line, i.e. they be collinear (see figure 1). 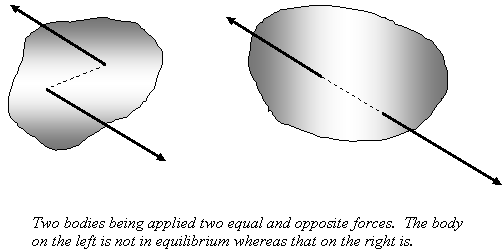 , the forces must be in the same plane, i.e. they must be coplanar. For equilibrium the torque about any point must also be zero. Since the forces are in the same plane, any two of them will intersect at a certain point O. These two forces will also have zero moment about O. If the third force does not pass through O, it will give a non-vanishing torque (see figure 2). So to satisfy the torque equation, the forces have to be concurrent. Zero torque condition can also be satisfied if the three forces are parallel forces (see figure 8); that is the other possibility for equilibrium under three forces.