Let us now perform the following experiment. Put a block on a rough surface and pull it by a force F (see figure 1). Since the force F has a tendency to move the block, the frictional force acts in the opposite direction and opposes the applied force F. All the forces acting on the block are shown in figure 1. Note that I have shown the weight and the normal reaction acting at two different points on the block. I leave it for you to think why should the weight and the normal reaction not act along the same vertical line?

It is observed that the block does not move until the applied force F reaches a maximum value Fmax. Thus from F = 0 up to F = Fmax, the frictional force adjusts itself so that it is just sufficient to stop the motion. It was observed by Coulombs that F max is proportional to the normal reaction of the surface on the object. You can observe all this while trying to push a table across the room; heavier the table, larger the push required to move it. Thus we can write

where µs is known as the coefficient of static friction. It should be emphasize again that is the maximum possible value of frictional force, applicable when the object is about to stop, otherwise frictional force could be less than, just sufficient to prevent motion. We also note that frictional force is independent of the area of contact and depends only on N .

As the applied force F goes beyond F , the body starts moving now experience slightly less force compound to. This force is seem to be when is known as the coefficient of kinetic friction. At low velocities it is a constant but decrease slightly at high velocities. A schematic plot of frictional force F as a function of the applied force is as shown in figure 2. 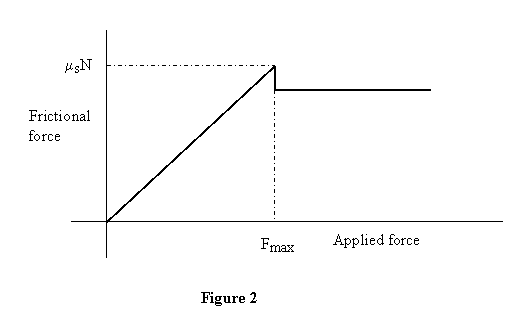 Values of frictional coefficients for different materials vary from almost zero (ice on ice) to as large as 0.9 (rubber tire on cemented road) always remaining less than 1.

A quick way of estimating the value of static friction is to look at the motion an object on an inclined plane. Its free-body diagram is given in figure 3. 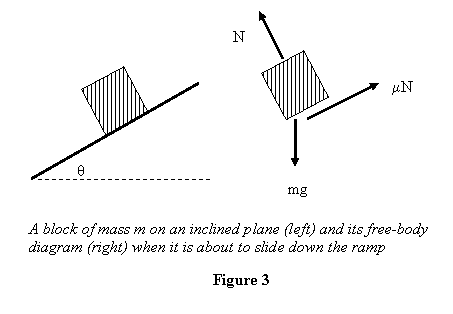 Since the block has a tendency to slide down, the frictional force points up the inclined plane. As long as the block is in equilibrium

As θ is increased, mgsinθ increases and when it goes past the maximum possible value of friction fmax the block starts sliding down. Thus at the angle at which it slides down we have