Geometric interpretation of cross product: The magnitude of the cross-product

, which is equal to

, is the area of a parallelogram formed by vectors 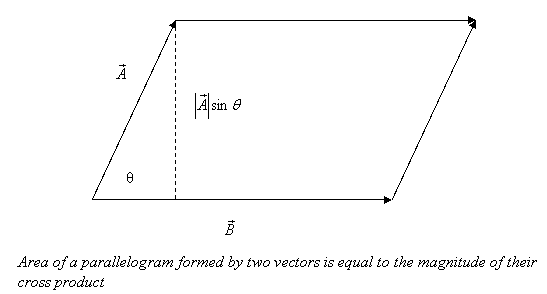 Derivative of a vector: After reviewing the vector algebra, we would now like to introduce you to the idea of differentiating a vector quantity. Here we take a vector

as depending on one parameter, say time t , and evaluate the derivative

. This is similar to what we do for a regular function. We evaluate the vector

from it, divide the difference

The derivative is easily understood if we think in terms of its derivatives. If we write a vector as

then the derivative of the vector is given as

Notice that only the components are differentiated, because the unit vectors

Using the definition above, it is easy to show that in differentiating the product of two vectors, the usual chain rule can be applied. This gives