statical determinacy: To introduce the terms used above, I consider a rod of length l and weight W held at a pin-joint on a floor at a distance of a from a wall, on which its other end is. This is shown in figure 1along with the free-body diagram of the rod. 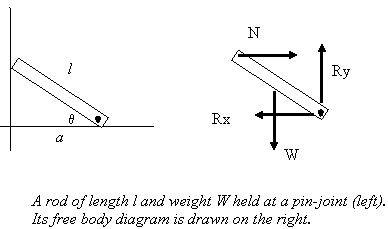 There are three unknowns - Rx, Ry and N - in the problem and three equations of equilibrium that will determine the unknowns. Specifically:

Taking moment about the pin, we get

In this case, the constraints or the external supports we apply are just sufficient to keep the system in equilibrium. Such systems are known as statically determinate systems. Now suppose we apply one more support. Let us support the rod at both ends by pin joints. The free-body diagram will then look like that shown in figure 2. 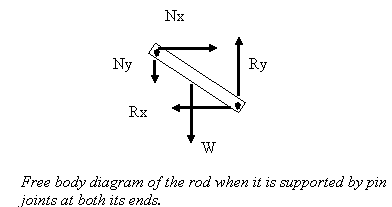 Now the pin on top end is also applying a force on the rod. Thus the equations of equilibrium read as

The situation on hand is that we have four unknowns - Rx, Ry, Nx and Ny - and only three equations. Thus one of the unknown cannot be determined. In particular only

is known and what are individual

cannot be determined unless some additional information is also given. Such systems are known as statically indeterminate systems. In such systems we are applying more constraints than are needed to keep the system in equilibrium. Even if we remove one of the constraints - in this case replace the upper pin by a plane surface - the system is capable of remaining in equilibrium. Such supports that can be removed without disturbing the equilibrium are known as redundant supports. And the number of redundant supports is the degree of statical indeterminacy .

After introducing you to the concepts discussed above, we will be studying trusses in the next lecture.