Vector or cross product: In defining the scalar product above, we have used three out of the nine possible products of the components of two vectors. From the six of these that are left i.e.

, if we define the vector

This is known as the vector or cross product of the two vectors. By calling this expression a vector, we implicitly mean that its component transform like those of a vector. Let us again take the example of looking at the components of this quantity from two frames rotated with respect to each other about the z-axis. In that case the x component of the vector product in the rotated frame is

and the y component is

Thus we see that the components of the vector product defined above do indeed transform like those of a vector. We leave it as an exercise to show that when the other frame is obtained by rotating about the x and the y axes also, the transformation of the components is like that of a vector. This is known as the vector or the cross product of vectors

. It can also be written in the form of a determinant as

Notice that this is the only contribution that transforms in this manner. For example

does not transform like a vector; I leave it as an exercise for you to show. So this cannot form a vector.

Now if we take the dot product of

through the smaller of the angle between them, the thumb gives the direction of in direction of

. It is also clear from this expression that the vector product of two non-zero vectors will vanish if the vectors are parallel i.e. the angle between them is zero. 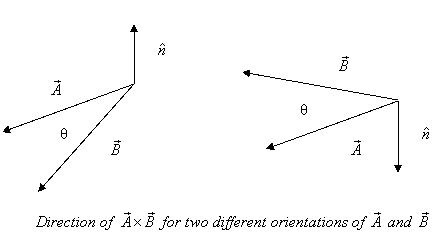 The vector product between two vectors is not commutative in that