For a general load distribution, we must start with a differential increment of the force dF= qdx. Here, q is the load per unit length. The total load is

Once the distributed loads have been reduced to their equivalent concentrated loads, the external reaction acting on the beam may be found by a straight forward static analysis. This is illustrated with the help of an example.

Suppose we have to determine the reactions at left and right support for the beam subjected to the uniform load distribution.

Since there are no horizontal forces, the horizontal reaction at left support is zero. Let vertical recation be R1. Let reaction at the right support be R2. The resultant of the distributed force is 10000 × 0.1=1000 N. By taking moment about the left support, we can find that resultant passes at a distance of 50mm from the left support. For the purpose of calculating the reactions, we can make equivalent free body diagram as shown below: 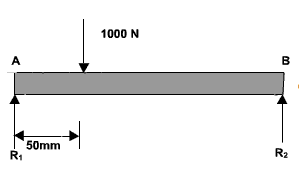 Note that this is an equivalent free body diagram for the purpose of calculating reactions. It is not entirely same as the loading given in the problem. Both the figures are similar in the sense that they will provide same support reactions.

We can write equations of equilibrium for the beam.