Shear force, axial force and bending moment: Consider a beam as shown in the figure.

Part (2) is balanced under the action of applied forces and internal forces C. Internal forces on this part are these forces which are applied by part 2 on part 1. On the cut face at C following forces may act:

For finding out the bending moment, consider the moment balance of part 2, taking the moment about C 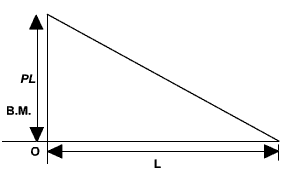 For finding out the axial force diagram, consider the horizontal force balance of section 2. Here we found