Principal Axes in Moment of Inertia

Principal Axes in Moment of Inertia: the changes in the moments and product of inertia of a rigid body due to a rotation of coordinate axes are considered, as shown in Fig. 1. The origin of the coordinate axes is located at the fixed point O. In general, the origin O is not the mass centerC of the rigid body.  it results that the moments of inertia cannot be negative. Furthermore, 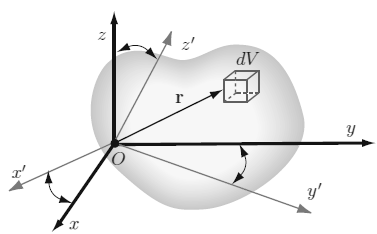 where r is the square of the distance from the origin O,

The distance r corresponding to any mass element ρ dV of the rigid body does not change with a rotation of axes from xyz to x' y' z' . Therefore, the sum
of the moments of inertia is invariant with respect to a coordinate system rotation. In terms of matrix notation, the sum of the moments of inertia is just the sum of
the elements on the principal diagonal of the inertia matrix and is known as the trace of that matrix. So the trace of the inertia matrix is unchanged by a coordinate
rotation because the trace of any square matrix is invariant under an orthogonal transformation.
Next, the products of inertia are considered. A coordinate rotation of axes can result in a change in the signs of the products of inertia. A 180◦ rotation about
the x-axis, for example, reverses the signs of Ixy and Ixz, while the sign of Iyz is unchanged. This occurs because the directions of the positive y and z axes are
reversed. On the other hand, a 90◦ rotation about the x-axis reverses the sign of Iyz. It can be seen that the moments and products of inertia vary smoothly with changes in the orientation of the coordinate system because the direction cosines vary smoothly. Therefore, an orientation can always be found for which a given product of inertia is zero. It is always possible to find an orientation of the coordinate system relative to a given rigid body such that all products of inertia are zero simultaneously, that is, the inertia matrix is diagonal. The three mutually orthogonal coordinate axes are known as principal axes in this case, and the corresponding moments of inertia are the principal moments of inertia. The three planes formed by the principal axes are called principal planes.
If I is a principal moment of inertia, then I satisfies the cubic characteristic equation

When the point O under consideration is the mass center of the rigid body, one speaks of central principal moments of inertia.