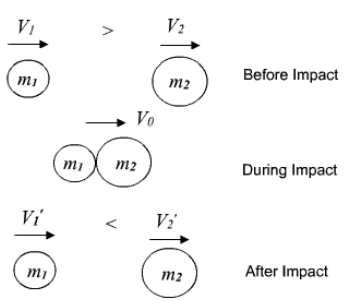 Consider the collinear motion of two spheres of masses m1 and m2 travelling with velocities V1and V2 . If V1 > V2 , collision occurs with the contact forces directed along the line of centers. This condition is called direct central impact. Following initial contact, a short period of increasing deformation takes palce until the contact area between the spheres ceases to increase. At this instant, both the spheres are moving with the same velocity V0 . During the remainder of contact, a period of restoration occurs during which the contact area decreases to zero. In this period, mass m2 is applying a force on m1 opposite to motion. Hence, the velocity of m1 keeps on decreasing till the spheres separate out. Because of Newton's third law, the particle m1 aplies a force on m2 along the direction of motion. Hence the velocity of m2 keeps on increasing. Thus, after the impact velocity of m1 will always be lower than the velocit y of m2.

Applying the law of conservative of linear momentum

For particle 1, the coefficient of restitution e is given as