Kinetics of a Particle: Direct application of Newton's second law

Direct application of Newton's second law: The acceleration of a particle is proportional to resultant force acting on it and is in the direction of this force.

where F is the resultant force and a is the acceleration.

This relation can be verified only experimentally.

We can also say that"inertial" system is a system in which F = ma is valid.

To understand the concept of inertial system, consider a cart from the roof of which a bob is suspended by a thread. 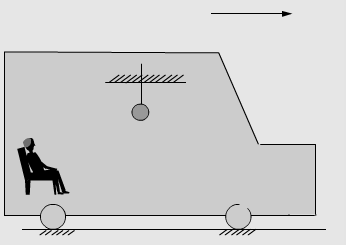 Whenever the cart accelerates or decelerates, the bob deflects. An observer sitting in the cart will think that bob is accelerating/decelerating without applying any force. Thus, for him the Newton's second law does not hold good. However, the fallacy is that he is applying the Newton's law in non-inertial system. One has to be careful in applying Newton's law to only an inertial frame of reference.

An application of Newton's law will be illustated by solving the dynamics of the following system: 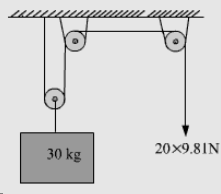 We neglect friction and the mass of the pulley and make the free body diagram of 30 kg mass as well as the pulley attached with it. In that case, the tension everywhere in the chord is equal to the pull of (20×9.81) N.

Downward force due to gravity =