Plane Kinetics of rigid bodies: A rigid body is composed of several particles. Its equation of motion can be obtained by applying Newton's law to individual particles and integrating the combined effect. 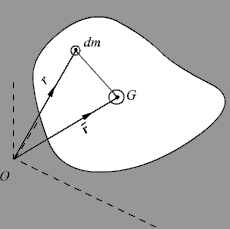 Let us consider a body whose mass center G is located by the position vector , then

ow, Newton's law for a particle of mass dm

Integrating both sides of the above equation

where m is the total mass of the body.

where Fnet is the net external force and , ........ since inertial forces balance themselves, because of Newton's third law.

Thus the resulatnt of the external forces acting on the body equals the mass m of the body times the acceleration a of its mass center G.

Note that acceleration of all particles in the body need not to be same.

The body in the following animation is moving with acceleration.

The acceleration of all particles is same at an instant of time. Consider the following animation.

In this body all the particles have different acceleration. Point O is stationary, hence, its acceleration is zero. Point A has the maximum acceleration.