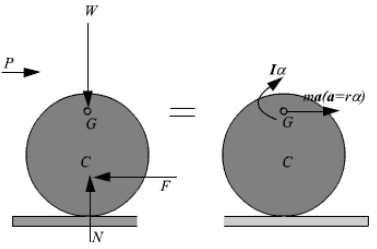 When a disk rolls without slippling, there is no relative motion between the point of the disk in contact with the ground and the ground itself. The friction force F will be self adjusting with the limiting value of .

When the disk rotates and slides at the same time, a relative motion exists between the point of the disk which is in contact with the ground and the ground itself and the force of friction has the magnitude , where is the coefficient of kinetic friction. In this case, however, the motion of the mass center G of the disk and the rotation of the disk about G are independent, and the acceleration of the center is not equal to the product of angular acceleration and radius.

The three different cases are summarized as follows:

Now, let us solve a problem on rolling.

A metal hook with a radius r is released from the rest on the incline. If the coefficient of static and kinetic friction are , determine the angular acceleration of the hook and time t for the hook to move a distance of S down the inclined. [ Figure A ]