Deflection of Beams:  Introduction: In all practical engineering applications, when we use the different components, normally we have to operate them within the certain limits i.e. the constraints are placed on the performance and behavior of the components. For instance we say that the particular component is supposed to operate within this value of stress and the deflection of the component should not exceed beyond a particular value.

In some problems the maximum stress however, may not be a strict or severe condition but there may be the deflection which is the more rigid condition under operation. It is obvious therefore to study the methods by which we can predict the deflection of members under lateral loads or transverse loads, since it is this form of loading which will generally produce the greatest deflection of beams.

Assumption: The following assumptions are undertaken in order to derive a differential equation of elastic curve for the loaded beam

1. Stress is proportional to strain i.e. hooks law applies. Thus, the equation is valid only for beams that are not stressed beyond the elastic limit.

2. The curvature is always small.

3. Any deflection resulting from the shear deformation of the material or shear stresses is neglected.

It can be shown that the deflections due to shear deformations are usually small and hence can be ignored. 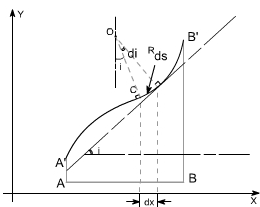 Consider a beam AB which is initially straight and horizontal when unloaded. If under the action of loads the beam deflect to a position A'B' under load or infact we say that the axis of the beam bends to a shape A'B'. It is customary to call A'B' the curved axis of the beam as the elastic line or deflection curve.

In the case of a beam bent by transverse loads acting in a plane of symmetry, the bending moment M varies along the length of the beam and we represent the variation of bending moment in B.M diagram. Futher, it is assumed that the simple bending theory equation holds good.

If we look at the elastic line or the deflection curve, this is obvious that the curvature at every point is different; hence the slope is different at different points.

To express the deflected shape of the beam in rectangular co-ordinates let us take two axes x and y, x-axis coincide with the original straight axis of the beam and the y – axis shows the deflection.

Futher,let us consider an element ds of the deflected beam. At the ends of this element let us construct the normal which intersect at point O denoting the angle between these two normal be di

But for the deflected shape of the beam the slope i at any point C is defined,