Before writing down the relations let us introduce a term ISOTROPY

ISOTROPIC: If the response of the material is independent of the orientation of the load axis of the sample, then we say that the material is isotropic or in other words we can say that isotropy of a material in a characteristics, which gives us the information that the properties are the same in the three orthogonal directions x y z, on the other hand if the response is dependent on orientation it is known as anisotropic.

Examples of anisotropic materials, whose properties are different in different directions are

Generalized Hook's Law: We know that for stresses not greater than the proportional limit.

These equation expresses the relationship between stress and strain (Hook's law) for uniaxial state of stress only when the stress is not greater than the proportional limit. In order to analyze the deformational effects produced by all the stresses, we shall consider the effects of one axial stress at a time. Since we presumably are dealing with strains of the order of one percent or less. These effects can be superimposed arbitrarily. The figure below shows the general triaxial state of stress. 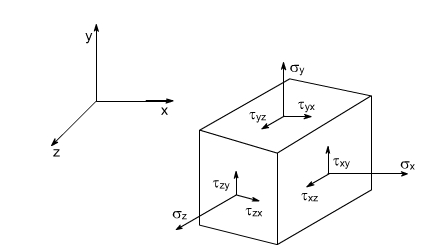 Let us consider a case when sx alone is acting. It will cause an increase in dimension in X-direction whereas the dimensions in y and z direction will be decreased. 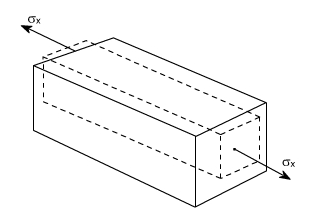 Therefore the resulting strains in three directions are