Shape of stress stain diagram: (a)  Ductile materials: For ductile material such as mild steel, the load Vs compression diagram would be as follows 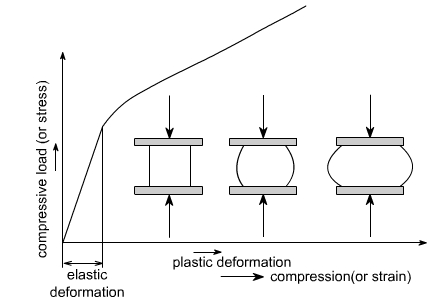 (1)  The ductile materials such as steel, Aluminum, and copper have stress – strain diagrams similar to ones which we have for tensile test, there would be an elastic range which is then followed by a plastic region.

(2)  The ductile materials (steel, Aluminum, copper) proportional limits in compression test are very much close to those in tension.

(3)  In tension test, a specimen is being stretched, necking may occur, and ultimately fracture fakes place. On the other hand when a small specimen of the ductile material is compressed, it begins to bulge on sides and becomes barrel shaped as shown in the figure above. With increasing load, the specimen is flattened out, thus offering increased resistance to further shortening ( which means that the stress – strains curve goes upward ) this effect is indicated in the diagram.

Brittle materials in compression typically have an initial linear region followed by a region in which the shortening increases at a higher rate than does the load. Thus, the compression stress – strain diagram has a shape that is similar to the shape of the tensile diagram.

However, brittle materials usually reach much higher ultimate stresses in compression than in tension.

For cast iron, the shape may be like this 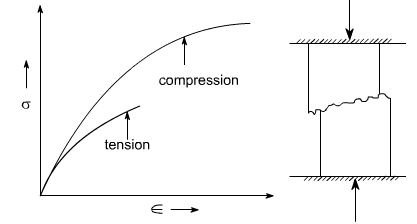 Brittle materials in compression behave elastically up to certain load, and then fail suddenly by splitting or by craking in the way as shown in figure. The brittle fracture is performed by separation and is not accompanied by noticeable plastic deformation.

The tem ‘hardness' is one having a variety of meanings; a hard material is thought of as one whose surface resists indentation or scratching, and which has the ability to indent or cut other materials.

Hardness test: The hardness test is a comparative test and has been evolved mainly from the need to have some convenient method of measuring the resistance of materials to scratching, wear or in dentation this is also used to give a guide to overall strength of a materials, after as an inspection procedure, and has the advantage of being a non – destructive test, in that only small indentations are lift permanently on the surface of the specimen.