Vickers Hardness test: The Vicker's Hardness test follows a procedure exactly a identical with that of Brinell test, but uses a different indenter. The steel ball is replaced by a diamond, having the from of a square – based pyramid with an angle of 1360 between opposite faces. This is pressed into the flat surface of the test piece using a specified force, and the diagonals of the resulting indentation measured is using a microscope. The Hardness, expressed as a Vicker's pyramid number is defined as the ratio F/A, where F is the force applied to the diamond and A is the surface area of the indentation.

It may be shown that 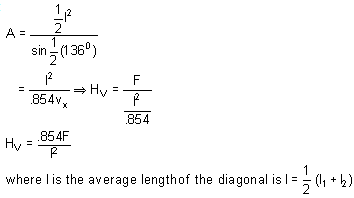 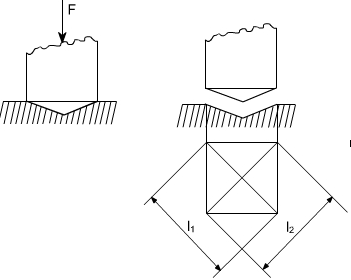 In the Vicker Test the indenters of pyramidal or conical shape are used & this overcomes the disadvantage which is faced in Brinell test i.e. as the load increases, the geometry of the indentation's does not change

The Variation of Hardness number with load is given below. 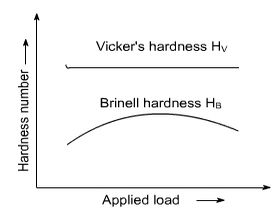 Advantage: Apart from the convenience the vicker's test has certain advantages over the Brinell test.

(i)  Harder material can be tested and indentation can be smaller & therefore less obtrusive or damaging.

Upto a 300 kgf /mm2 both tests give the same hardness number but above too the Brinell test is unreliable.