Given a function of one variable say f(x); we define the derivative of f(x) at x = a to be 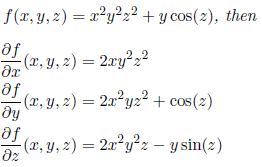 This result was first proved by Leonard Euler.