Statements: If f (x,y) has continuous partial derivatives up to nth order in a neighbourhood of a point (a,b) then

Here Rn is called the remainder after n times. By Taylor's theorem given in

Further if the Taylor's series of f (x,y) is approximated to some terms upto a particular degree the resulting expression of f(x,y) is called as the Taylor's Polynomials.

The function and its partial derivatives avaluated at (0,0) is as follows: 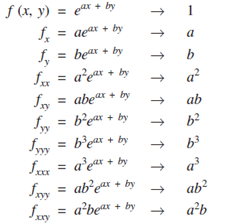 Substitute these value in the expansion of f (x,y), we get;