In this topic we discuss a repeated process of integration of a function of two and three variables reffered to as:

The double integral of a function f (x,y) over thw region D in R2 is denoted by,

Let f (x,y) be a continuous function in R2 defined on a closed rectangle;

For any fixed x ∈ [a,b] consider the integral

Similarly we can define another;

This is called Iterated Integrals.

For continuous function f (x,y) we have;

If f (x,y) is continuous on a bounded region S and S is given by,

are two continuous functions on [a,b] then,

Then, the iterated integral in the R.H.S is also written in the form of 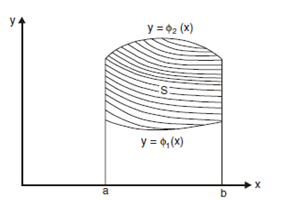 If S can not be written in neither of the above two forms we divide S into finite numbers of subregion such that each of the subregion can be represented in one of the above forms and we get the double integral over S by adding the integrals over these subregion.