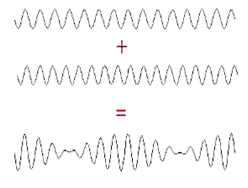 The connection to these new pictures of electrons and light from our more familiar view of an electron as a particle and light as a wave is provided by the relation.

Which links the mass and speed of an electron to the wavelength of the associated wave, and by the relation

Which links the frequency of a light wave to the energy of the associated photon.

These relations are not derivable from other relations; they are hypothesized, and are ``true'' only so long as they satisfy experimental verification. Even so, they are unlike most mathematical statements, however, in the following sense. A statement like Newton's 2nd law of motion,