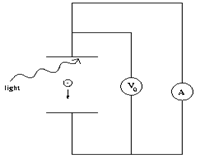 In this effect light is shone on a metal, and electrons are released. These electrons can be attracted towards a positively charged plate a certain distance below, thereby establishing a photoelectric current. It is convenient not to measure this current itself but to measure the stopping potential V0 required to reduce this current to zero. The stopping potential is related to the (maximum) kinetic energy of the ejected electron

When these photons hit the metal, they could give up some or all of their energy to an electron. A certain amount of energy would be required to release the electrons from their bonds to the metal - this energy is called the work  function, Φ  , of the metal. The remaining energy would appear  as kinetic energy of the released electron. Thus, the maximum kinetic energy the electrons could have is 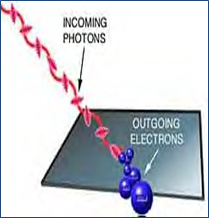 2.       In the photoelectric effect, you hit target with EM radiation and electrons fly out.

3.       The electrons ejected from the target are called “photoelectrons”. 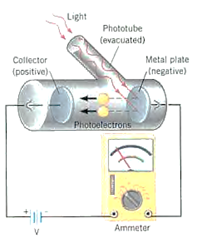 1.      An adjustable voltage is applied.  Voltage can be forward or reverse biased (which slows down the electrons).

2.      Photoelectrons return to cathode through an ammeter which records the current.