In this experiment we will study two aspects of the interaction of photons with electrons.  The first of these is the Compton effect named after Arthur Holly Compton who received the Nobel Prize for physics in 1927 for its discovery.  The other deals with the radiation emitted when a tightly bound electron from a heavy element is kicked out by a photon.  This gives rise to “characteristic” X-rays that can be used to identify the element.

Kinematics of the Compton Effect:

If a photon with energy E0 strikes a stationary electron, as in Figure 1, then the energy of the scattered photon, E, depends on the scattering angle, Θ, that it makes with the direction of the incident photon according to the following equation:

For instance, the lowest energy for the scattered photon results when it emerges at 180 degrees with respect to its original direction, in which above equation shows that the incident and scattered photon energies are related as:

The total energy of the electron Ee is the sum of its kinetic energy Te and its rest energy mec2, i.e

Clearly the electron energy achieves its maximum value in this scattering where the photon is back scattered. 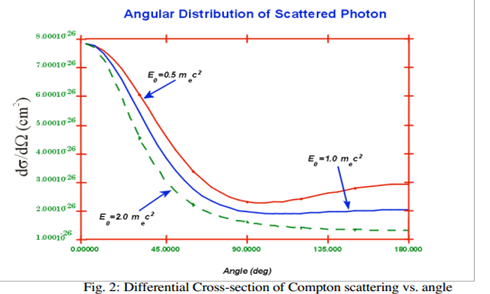