Superconductivity is a phenomenon observed in several materials that demonstrate no resistance to the ﬂow of an electric current when cooled to temperatures ranging from near absolute zero (0K) to liquid nitrogen temperatures (77K). The temperature below which electrical resistance is zero is called the critical temperature Tc and this temperature is a characteristic of the material. Superconductivity occurs in a wide variety of materials, including simple elements like tin and aluminium, various metallic alloys and some heavily-doped semiconductors. Superconductivity does not occur in noble metals like gold and silver, nor in pure samples of ferromagnetic metals. Another striking property of superconductors is that they are perfectly diamagnetic. Superconductivity was discovered in 1911 by Heike Kamerlingh Onnes, who was studying the resistance of solid mercury at cryogenic temperatures using liquid helium as a refrigerant. He got 1913 Physics Nobel Prize for his work. 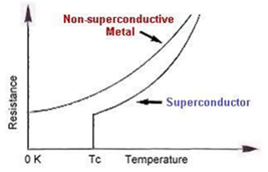