One of the most important accessories of a boiler is a super heater.The super heater increases the capacity of the plant.

Superheater effects improvement and economy in the following ways : 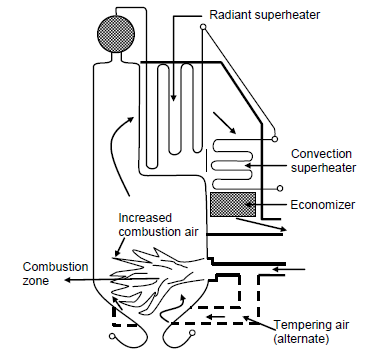 Excess Air Control
The steam outlet temperature of a convection superheater may be increased at partial load by increasing the excess air supply. The reduced gas temperature decreases the furnace heat absorption for the same steam production. The increased gas mass flow with its increased total heat content serves to increase the degree of superheat. 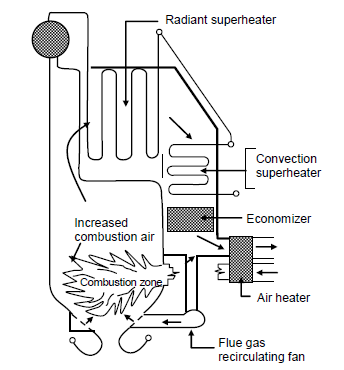 Flue Gas Recirculation
The recirculation of some percentage of the combustion gases serves to control steam temperature in the same manner as does an increase in excess air. By introducing the hot gases below the combustion zone, relatively high efficiency may be maintained.

Gas By-pass Control
The boiler convection banks can be arranged in such a manner that portion of the gases can be by-passed around the superheater elements. The superheater is oversized so that it will produce the required degree of superheat at partial load conditions. As the load increases, some of the flue gases are by-passed.