5. Hot spinning
6. Hot piercing or seamless tubing
7. Tube Forming and
8. Hot forming of welded pipes
Some of the important hot working processes are described as under.

Hot Rolling: Rolling is the most rapid method of forming metal into desired shapes by plastic deformation through compressive stresses using two or more than two rolls. It is one of the most widely used of all the metal working processes. The main objective of rolling is to convert larger sections such as ingots into smaller sections which can be used either directly in as rolled state or as stock for working through other processes. The coarse structure of cast ingot is convened into a fine grained structure using rolling process as shown in Fig. 1. Significant improvement is accomplished in rolled parts in their various mechanical properties such as toughness, ductility, strength and shock resistance. The majority of steel products are being converted from the ingot form by the process of rolling. To the steel supplied in the ingot form the preliminary treatment imparted is the reduction in its section by rolling as shown in figure. The crystals in parts are elongated in the direction of rolling, and they start to reform after leaving the zone of stress. Hot rolling process is being widely used in the production of large number of useful products such as rails, sheets, structural sections, plates etc. There are different types of rolling mills, which are described as under. 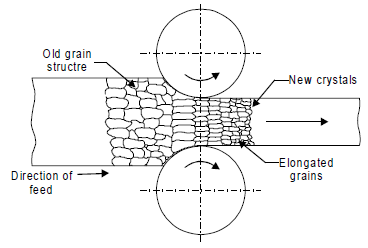 Two-High Rolling Mill: A two-high rolling mill has two horizontal rolls revolving at the same speed but in opposite direction. The rolls are supported on bearings housed in sturdy upright side frames called stands. The space between the rolls can be adjusted by raising or 1owering the upper roll. Their direction of rotation is fixed and cannot be reversed. The reduction in the thickness of work is achieved by feeding from one direction only. However, there is another type of two-high rolling mill, which incorporates a drive mechanism that can reverse the direction of rotation of the rolls. In a two-high reversing rolling mill, there is continuous rolling of the workpiece through back-and-forth passes between the rolls.

Three-High Rolling Mills: It consists of three parallel rolls, arranged one above the other . The directions of rotation of the upper and lower rolls are the same but the intermediate roll rotates in a direction opposite to both of these. This type of rolling mill is used for rolling of two continuous passes in a rolling sequence without reversing the drives. This results in a higher rate of production than the two-high rolling mill.

Four-High Rolling Mill: It is essentially a two-high rolling mill, but with small sized rolls. Practically, it consists of our horizontal rolls, the two middle rolls are smaller in size than the top and bottom rolls. The smaller size rolls are known as working rolls which concentrate
the total rolling pressure over the workpiece. The larger diameter rolls are called back-up rolls and their main function is to prevent the deflection of the smaller rolls, which otherwise would result in thickening of rolled plates or sheets at the centre. The common products of these mills are hot or cold rolled plates and sheets.

Cluster Mill: It is a special type of four-high rolling mill in which each of the two smaller working rolls are backed up by two or more of the larger back-up rolls. For rolling hard thin materials, it may be necessary to employ work rolls of very small diameter but of
considerable length. In such cases adequate support of the working rolls can be obtained by using a cluster-mill. This type of mill is generally used for cold rolling work.