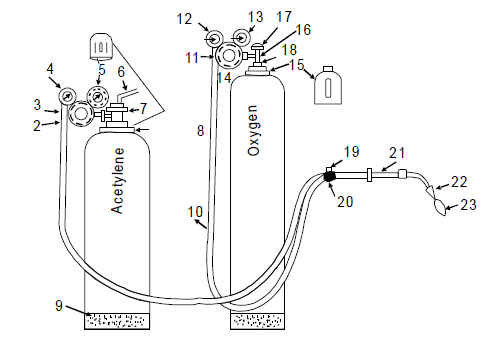 Acetylene and oxygen gas is stored in compressed gas cylinders. These gas cylinders differ widely in capacity, design and colour code. However, in most of the countries, the standard size of these cylinders is 6 to 7 m3 and is painted black for oxygen and maroon for acetylene. An acetylene cylinder is filled with some absorptive material, which is saturated with a chemical solvent acetone. Acetone has the ability to absorb a large volume of acetylene and release it as the pressure falls. If large quantities of acetylene gas are being consumed, it is much cheaper to generate the gas at the place of use with the help of acetylene gas generators. Acetylene gas is generated by carbide-to-water method. Oxygen gas cylinders are usually equipped with about 40 litres of oxygen at a pressure of about 154 Kgf/cm2 at 21°C. To provide against dangerously excessive pressure, such as could occur if the cylinders were exposed to fire, every valve has a safety device to release the oxygen before there is any danger of rupturing the cylinders. Fragile discs and fusible plugs are usually provided in the cylinders valves in case it is subjected to danger.
Gas pressure regulators: Gas pressure regulators are employed for regulating the supply of acetylene and oxygen gas from cylinders. A pressure regulator is connected between the cylinder and hose leading to welding torch. The cylinder and hose connections have left-handed threads on the acetylene regulator while these are right handed on the oxygen regulator. A pressure regulator is fitted with two pressure gauges, one for indication of the gas pressure in the cylinder and the other for indication of the reduced pressure at which the gas is going out.
Welding torch: Fig 2 shows the construction of the welding torch. It is a tool for mixing oxygen and acetylene in correct proportion and burning the mixture at the end of a tip. Gas flow to the torch is controlled with the help of two needle valves in the handle of the torch. There are two basic types of gas welding torches:
(1) Positive pressure (also known as medium or equal pressure), and
(2) Low pressure or injector type
The positive pressure type welding torch is the more common of the two types of oxyacetylene torches.

Torch tips: It is the portion of the welding apparatus through which the gases pass just prior to their ignition and burning. A great variety of interchangeable welding tips differing in size, shape and construction are available commercially. The tip sizes are identified by the diameter of the opening. The diameter of the tip opening used for welding depends upon the type of metal to be welded.
Hose pipes: The hose pipes are used for the supply of gases from the pressure regulators. The most common method of hose pipe fitting both oxygen and acetylene gas is the reinforced rubber hose pipe. Green is the standard color for oxygen hose, red for acetylene, and black hose for other industrially available welding gases.

Goggles: These are fitted with colored lenses and are used to protect the eyes from harmful heat and ultraviolet and infrared rays.
Gloves: These are required to protect the hands from any injury due to the heat of welding process.
Spark-lighter: It is used for frequent igniting the welding torch.
Filler rods: Gas welding can be done with or without using filler rod. When welding with the filler rod, it should be held at approximately 900 to the welding tip. Filler rods have the same or nearly the same chemical composition as the base metal. Metallurgical properties of the weld deposit can be controlled by the optimum choice of filler rod. Most of the filler rods for gas welding also contain deoxidizers to control the oxygen content of weld pool.
Fluxes: Fluxes are used in gas welding to remove the oxide film and to maintain a clean surface.
These are usually employed for gas welding of aluminium, stainless steel, cast iron, brass and silicon bronze. They are available in the market in the form of dry powder, paste, or thick solutions.