Gas Welding Processes: A fusion welding process which joins metals, using the heat of combustion of an oxygen /air and fuel gas (i.e. acetylene, hydrogen propane or butane) mixture is usually referred as ‘gas welding’. The intense heat (flame) thus produced melts and fuses together the edges of the
parts to be welded, generally with the addition of a filler metal. Operation of gas welding is shown in Fig. 1. The fuel gas generally employed is acetylene; however gases other than acetylene can also be used though with lower flame temperature. Oxy-acetylene flame is the most versatile and hottest of all the flames produced by the combination of oxygen and other fuel gases. Other gases such as Hydrogen, Propane, Butane, Natural gas etc., may be used for some welding and brazing applications. 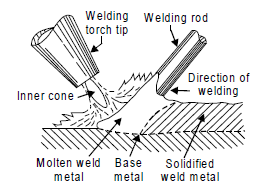 Oxy-Acetylent Welding: In this process, acetylene is mixed with oxygen in correct proportions in the welding torch and ignited. The flame resulting at the tip of the torch is sufficiently hot to melt and join the parent metal. The oxy-acetylene flame reaches a temperature of about 3300°C and thus can melt most of the ferrous and non-ferrous metals in common use. A filler metal rod or welding rod is generally added to the molten metal pool to build up the seam slightly for greater strength.

Types of Welding Flames: In oxy-acetylene welding, flame is the most important means to control the welding joint and the welding process. The correct type of flame is essential for the production of satisfactory welds. The flame must be of the proper size, shape and condition in order to operate with maximum efficiency. There are three basic types of oxy-acetylene flames.
1. Neutral welding flame (Acetylene and oxygen in equal proportions). 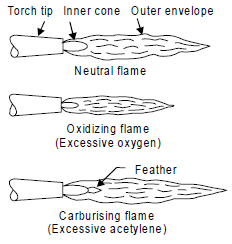 Neutral Welding Flame: A neutral flame results when approximately equal volumes of oxygen and acetylene are mixed in the welding torch and burnt at the torch tip. The temperature of the neutral flame is of the order of about 5900°F (3260°C). It has a clear, well defined inner cone, indicating that the combustion is complete. The inner cone is light blue in color. It is surrounded by an outer flame envelope, produced by the combination of oxygen in the air and superheated carbon monoxide and hydrogen gases from the inner cone. This envelope is Usually a much darker blue than the inner cone. A neutral flame is named so because it affects no chemical change on the molten metal and, therefore will not oxidize or carburize the metal. The neutral flame is commonly used for the welding of mild steel, stainless steel, cast Iron, copper, and aluminium. Carburising or Reducing Welding Flame.
The carburizing or reducing flame has excess of acetylene and can be recognized by acetylene feather, which exists between the inner cone and the outer envelope. The outer flame envelope is longer than that of the neutral flame and is usually much brighter in color. With iron and steel, carburizing flame produces very hard, brittle substance known as iron carbide. A reducing flame may be distinguished from carburizing flame by the fact that a carburizing flame contains more acetylene than a reducing flame. A reducing flame has an approximate temperature of 3038°C. A carburizing-flame is used in the welding of lead and for carburizing (surface hardening) purpose. A reducing flame, on the other hand, does not carburize the metal; rather it ensures the absence of the oxidizing condition. It is used for welding with low alloy steel rods and for welding those metals, (e.g., non-ferrous) that do not tend to absorb carbon. This flame is very well used for welding high carbon steel.
Oxidising Welding flame: The oxidizing flame has an excess of oxygen over the acetylene. An oxidizing flame can be recognized by the small cone, which is shorter, much bluer in color and more pointed than that of the neutral flame. The outer flame envelope is much shorter and tends to fan out at the end. Such a flame makes a loud roaring sound. It is the hottest flame (temperature as high as 6300°F) produced by any oxy-fuel gas source. But the excess oxygen especially at high temperatures tends to combine with many metals to form hard, brittle, low strength oxides. Moreover, an excess of oxygen causes the weld bead and the surrounding area to have a scummy or dirty appearance. For these reasons, an oxidizing flame is of limited use in welding. It is not used in the welding of steel. A slightly oxidizing flame is helpful when welding (i) Copper-base metals (ii) Zinc-base metals and (iii) A few types of ferrous metals such as manganese steel and cast iron. The oxidizing atmosphere in these cases, create a basemetal oxide that protects the base metal.