Resistance Seam Welding: It is a continuous type of spot welding wherein spot welds overlap each other to the desired . In this process coalescence at the faying surfaces is produced by the heat obtained from the resistance to electric current (flow) through the work pieces held together under pressure by circular electrodes. The resulting weld is a series of overlapping resistance-spots welds made progressively along a joint by rotating the circular electrodes. The principle of seam welding is shown in Fig. 1 (a) and resistance seam welding process set up is shown in Fig. 1 (b). The seam welding is similar to spot welding, except that circular rolling electrodes are used to produce a continuous air-tight seam of overlapping welds. Overlapping continuous spot welds seams are produced by the rotating electrodes and a regularly interrupted current.

Applications:
1. It is used for making leak proof joints in fuel tanks of automobiles.
2. Except for copper and high copper alloys, most other metals can be seam welded.
3. It is also used for making flange welds for use in watertight tanks.

Resistance Projection Welding: Fig.2 shows the projection welding. This process is a resistance welding process in which two or more than two spot welds are made simultaneously by making raised portions or projections on predetermined locations on one of the workpiece. These projections act to localize the heat of the welding circuit. The pieces to be welded are held in position under pressure being maintained by electrodes. The projected contact spot for welding should be approximately equal to the weld metal thickness. The welding of a nut on the automotive chasis is an example of projection welding. 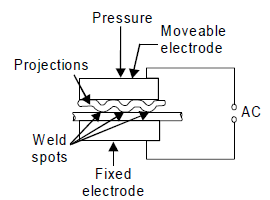