Shaper: Shaper is a reciprocating type of machine tool in which the ram moves the cutting tool backwards and forwards in a straight line. The basic components of shaper are shown in Fig. 1. It is intended primarily to produce flat surfaces. These surfaces may be horizontal, vertical, or inclined. In general, the shaper can produce any surface composed of straight-line elements. The principal of shaping operation is shown in Fig. 2 (a, b). Modern shapers can also generate contoured surface as shown in Fig. 3. A shaper is used to generate flat (plane) surfaces by means of a single point cutting tool similar to a lathe tool. 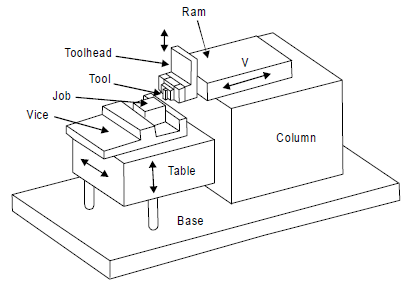 Fig. 1 Principal components of a shaper

WORKING PRINCIPLE OF SHAPER: A single point cutting tool is held in the tool holder, which is mounted on the ram. The workpiece is rigidly held in a vice or clamped directly on the table. The table may be supported at the outer end. The ram reciprocates and thus cutting tool held in tool holder moves forward and backward over the workpiece. In a standard shaper, cutting of material takes place during the forward stroke of the ram. The backward stroke remains idle and no cutting takes place during this stroke. The feed is given to the workpiece and depth of cut is adjusted by moving the tool downward towards the workpiece. The time taken during the idle stroke is less as compared to forward cutting stroke and this is obtained by quick return mechanism. The cutting action and functioning of clapper box is shown in Fig. 4 during forward and return stroke.

Fig.2 (a, b) Working principal of shaping machine 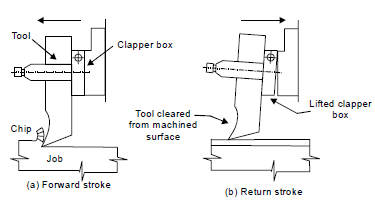