Specification of a Shaper

Specification of a Shaper: The size of a shaper is specified by the maximum length of stroke or cut it can make. Usually the size of shaper ranges from 175 to 900 mm. Besides the length of stroke, other particulars, such as the type of drive (belt drive or individual motor drive), floor space required, weight of the machine, cutting to return stroke ratio, number and amount of feed, power input etc. are also sometimes required for complete specification of a shaper.

SHAPER MECHANISM: In a shaper, rotary motion of the drive is converted into reciprocating motion of the ram by the mechanism housed within the column or the machine. In a standard shaper metal is removed in the forward cutting stroke, The shaper mechanism is so designed that it moves the ram holding the tool at a comparatively slower speed during forward cutting stroke, whereas during the return stroke it allow the ram to move at a faster speed to reduce the idle return time. This mechanism is known as quick return mechanism. The reciprocating movement of the ram and the quick return mechanism of the machine are generally obtained by anyone of the following methods:

Crank and Slotted Link Mechanism: In crank and slotted link mechanism (Fig. 1), the pinion receives its motion from an individual motor or overhead line shaft and transmits the motion or power to the bull gear. Bull gear is a large gear mounted within the column. Speed of the bull gear may be changed by different combination of gearing or by simply shifting the belt on the step cone pulley. A radial slide is bolted to the centre of the bull gear. This radial slide carries a sliding block into which the crank pin is fitted. Rotation of the bull gear will cause the bush pin to revolve at a uniform speed. Sliding block, which is mounted upon the crank pin is fitted within the slotted link. This slotted link is also known as the rocker arm. It is pivoted at its bottom end attached to the frame of the column. The upper end of the rocker arm is forked and connected to the ram block by a pin. With the rotation of bull gear, crank pin will rotate on the crank pin circle, and simultaneously move up and down the slot in the slotted link giving it a rocking movement, which is communicated to the ram. Thus the rotary motion of the bull
gear is converted to reciprocating motion of the ram. 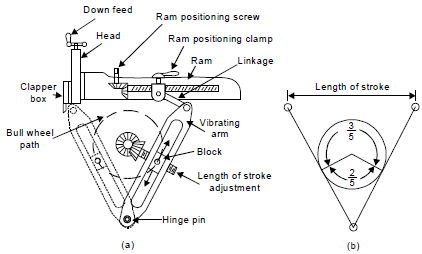