Thread Cutting: Fig.1 shows the setup of thread cutting on a lathe. Thread of any pitch, shape and size can be cut on a lathe using single point cutting tool. Thread cutting is operation of producing a helical groove on spindle shape such as V, square or power threads on a cylindrical surface. The job is held in between centres or in a chuck and the cutting tool is held on tool post. The cutting tool must travel a distance equal to the pitch (in mm) as the work piece completes a revolution. The definite relative rotary and linear motion between job and cutting tool is achieved by locking or engaging a carriage motion with lead screw and nut mechanism and fixing a gear ratio between head stock spindle and lead screw. To make or cut threads, the cutting tool is brought to the start of job and a small depth of cut is given to cutting tool using cross slide. 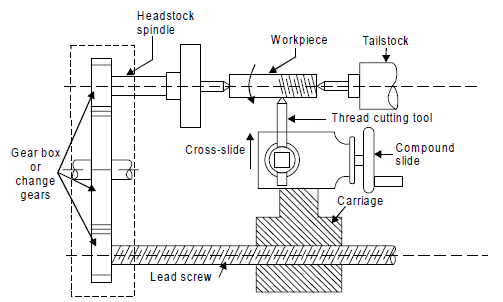 DRILLING ON A LATHE: For producing holes in jobs on lathe, the job is held in a chuck or on a face plate. The drill is held in the position of tailstock and which is brought nearer the job by moving the tailstock along the guide ways, the thus drill is fed against the rotating job as shown in Fig. 2.

FEED: Feed is defined as the distance that a tool advances into the work during one revolution of the headstock spindle. It is usually given as a linear movement per revolution of the spindle or job. During turning a job on the center lathe, the saddle and the tool post move along the bed of the lathe for a particular feed for cutting along the length of the rotating job.