Galvanization: Although galvanizing and electroplating may seem to go hand in hand, the developments of the two may be considered separate. A French chemist named Paul Jacque Malouin first demonstrated coating iron by submerging it in a molten zinc solution to the French Royal Academy of Sciences in 1742. In 1772, Luigi Galvani discovered several bioelectrical processes when he observed a frog’s leg twitched when it was touching an electric spark. Thus this became known as galvanization (although this is the classical term, and its meaning has since changed). Alessandro Volta then further researched Galvanization as he studied electropotential between two metals. For the next several decades many different scientists and engineers developed both galvanizing and electroplating properties unitl in1837, a French engineer Stanislas Sorel acquired a patent for coating iron in a zinc ‘galvanic paint’ using a method called ‘hot-dip galvanizing’, where the metals are simply submerged in a pool of zinc. From then on there was a massive increase in zinc consumption to galvanize mostly steel metal throughout Europe, and eventually the United States.

working: external image clip_image001.gif To understand electroplating we have to know the main reason electroplating is being done in the first place. The main purposes of electroplating are appearance, protection, and special surface properties of engineering or mechanical properties. Electroplating is a process through which a coating is added to a conductor using electricity via reduction reactions. The surface can be conductors like metals or it can be a nonconductor like plastic. The work piece that is getting plated is the cathode which is negatively charged. The anode on the other hand is capable of being one the two things which are: the sacrificial anode or the permanent anode. The Sacrificial anode is the anode that is made of metal and then end up deposited. The permanent anode can only complete the electrical circuit.

Copper is an excellent conductor of electricity so it is basic to such items as printed circuits and communications equipment. It does, however, quickly form tarnish films that interfere with joining operations such as soldering. To make soldering easier, coatings of tin or tin-lead alloys are often applied to copper, and for better contacts over plates of gold are frequently required. Other surface properties may call for modification; if light reflection is important, a silver or rhodium plate may be necessary. In wave guides for radar, high electrical conductivity is the most important criterion, so silver is the preferred metal. 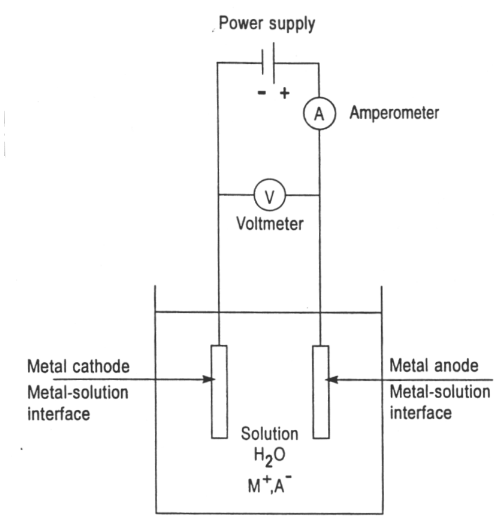 Two materials are most commonly usually used within the anode reaction and they are platinum and carbon. One of the main important parts of electroplating is electrolysis. Electrolysis is the electrical conductor in which current is carried by ions rather than any free electrons. The main function of an electrolyte is that it completes the electric circuit between the cathode and the anode, so the electric current, which is the positive ions in the electrolyte, will move toward the cathode, and then the negative ions will move to the positive ions. This migration of ions through the electrolyte constitutes the electric current in that part of the circuit. The migration of electrons into the anode through the wiring and an electric generator and then back to the cathode constitutes the current in the external circuit.

This figure shows how plating works; it begins with plating copper from a solution of the metal salt copper sulfate. The cathode, which is the work piece, is to be plated, and is negatively charged. Some of the electrons from the cathode bar transfer to the positively charged copper ions. These copper atoms take their place on the cathode surface and copper plate it. The same number of sulfate ions SO4 is discharged on the copper anodes, thereby completing the electrical circuit. In so doing, they form a new quantity of copper sulfate that dissolves in the solution and restores it to its original composition. This procedure is typical of ordinary electroplating processes with sacriï¬cial anodes; the current deposits a given amount of metal on the cathode and the anode dissolves to the same extent of the same electrical charge, maintaining the solution more or less uniformly.

In general knowledge, all electron transfer reactions are considered oxidation and reductions. The substance gaining electrons (oxidizing agent) oxidizes the substance that is losing electrons (reducing agent). In the process, the oxidizing agent is reduced by the reducing agent. Moreover, the reduction process is sometimes called electro nation, and the oxidation process is called deelectronation. Since a cathode is attached to the negative pole of the electric source, it supplies electrons to the electrolyte. On the contrary, an anode is connected to the positive pole of the electric source; therefore, it accepts electrons from electrolyte. Various reactions take place at the electrodes during electrolysis. In general reduction takes place at the cathode, and oxidation takes place at the anode.

Chrome plating is one of the most commonly used types of electroplating. Chromium is deposited onto a metal (usually steel or iron) which can then be finished into a shiny reflective coating. This coating also puts a physical barrier between a metal and the elements, so it is more resistant to wear. Chrome plating is used in automotive, furniture, and tools because of its resistance to wear and its shiny coating. Metals can also be plated with materials such as gold and silver for finish purposes, because plating a less expensive metal with an expensive metal costs less than making a whole product out of an expensive metal. Most applications of electroplating for finishing purposes are designed to create high quality looking goods without the entire cost of high quality materials. The Government also uses electroplating with our money. They plate zinc disks with copper to form pennies to keep the cost of manufacturing down.

Galvanization refers specifically to the plating of a metal with zinc to prevent rusting by cathodic prevention and a physical barrier. This is used heavily in construction and automotive applications because it is a low cost process that produces a long lasting, low maintenance product that will withstand weather, even if the coating is scratched. Nearly all structural metal in buildings is galvanized to prevent rust, and most hardware companies offer galvanized fasteners, such as nails and screws, which are for use outdoors. In the automotive industry car panels are galvanized to prevent rust from destroying vehicles. This is used more in areas where the weather conditions can cause rust to form very quickly such as Europe and North America. Most companies galvanize essential and external parts like the frame and doors and other areas that need rust protection, but some companies (ex/ Volkswagen) galvanize the whole body and all panels of their vehicles. This process is used once again to keep costs down. The cost of maintaining and operating a vehicle would be much higher if panels were not galvanized, due to rust damage. Galvanization also has uses in the marine industry. Boats and ships all have metal parts that are in constant contact with water, and would rust very quickly if they were not galvanized. Ships are completely made of galvanized steel, because it is cheaper to coat steel than to make such large ships out of a non reactive metal.

Electroplating is used in many manufacturing applications to coat a less expensive metal with an expensive or better looking finish for visual effect. Also, due to its rust preventing capabilities there are applications for electroplating and galvanizing in nearly everything that involves metals that need to withstand the elements.