which minimize the functional

Then the following differential equations must be satiesfied:

The equations is called the Euler Lagrange Equations. Before providing this theorem, we consider an example.

Then the Euler Lagrange Equations is given by: 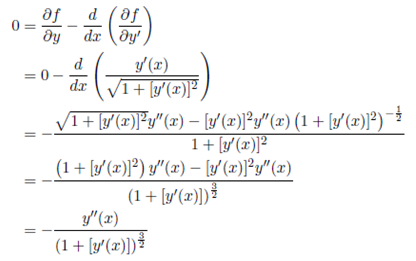 For example if f (x) = sin (x) and x (t) = t2, then derivatives with respect to t of z = sin (t2) is given by cos (t2) 2t. It turns out that there is a chain rule for function of several variables. For example suppose x and y are function of t and consider the functions

We can think of z as the composition of the functions

with in the functions x (t) and y (t). By a chain rule theorem for function of several variables,

Note the similarity function between the above equations. For function of several variables one need to keep track of each of the independent variables seperately applying a chain rule to each. The result for the chain rule theorem for the required functions z = f (x,y) to have continuous partial derivatives and for x (t) and y (t) to be differentiable.