An integral evaluated over a surface is called a Surface Integral. Consider a surface S and a point P on it. Let

be a vector function of x,y,z defined and continuous over S. In 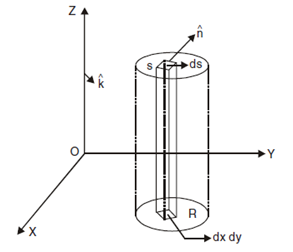 ds in the projection of the vectorial element

Similarly we can argue to state that

All these three results hold good if we write

If V is the volume bounded by a surface and if F (x,y,z) is asingle valued function defined over V then the volume integral of F (x,y,z) over V is given by

If the volume is divided into sub- element having sides dx,dy,dz then the volume integral is given by the triple integral

which can be evaluated  by choosing appropriate limits for x,y,z.

Where S is the surface of the sphere

Where V is the volume of the sphere with unit radius and V = 4/3 πr3 for a sphere of radius r.