Intercommunication among mechatronics subsystems plays a key role in their engagement of applications, both of fixed and flexible configurations (a car, a hi-fi system, a fixed manufacturing line versus a flexible plant, a wireless Pico-net of computer peripheral devices).

It is clear that digital communication depends on the designer’s demands for the amount of transferred data, the distance between the systems, and the requirements on the degree of data reliability and security.

The signal is represented by alterations of amplitude, frequency, or phase.

This is accomplished by changes in voltage/current in metallic wires or by electromagnetic waves, both in radio transmission and infrared optical transmission (either “wireless” for short distances or optical fibers over fairly long distances).

They not only establish connection on a utilizable speed, check data transfer, format and compress data, but can make communication transparent for an application. For example, no difference can be seen between local and remote data sources. 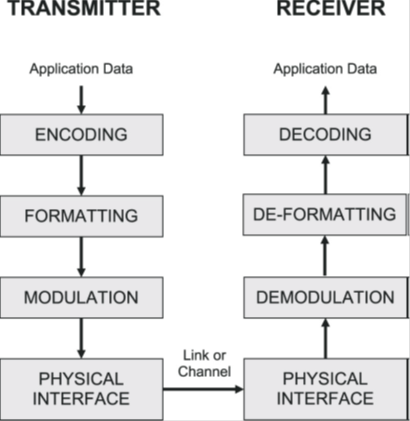 Depending on the number of users, the communication is done either point-to-point (RS-232C from PC COM port to an instrument), point-to-multipoint (buses, networks), or even as a broadcasting (radio).

Bidirectional transmission can be full duplex (phone, RS-232C) or semi duplex (most of digital networks). Concerning the link topology, a star connection or a tree connection employs a device (“master”) mastering communication in the main node(s).

A ring connection usually requires Token Passing method and a bus communication is controlled with various methods such as Master-Slave pooling, with or without Token Passing, or by using an in deterministic access (CSMA/CD in Ethernet).