The hardware-in-the-loop simulation (HIL) is characterized by operating real components in connection with real-time simulated components.

Usually, the control system hardware and software is the real system, as used for series production.

The controlled process (consisting of actuators, physical processes, and sensors) can either comprise simulated components or real components, as seen in Fig. (A). In general, mixtures of the shown cases are realized. Frequently, some actuators are real and the process 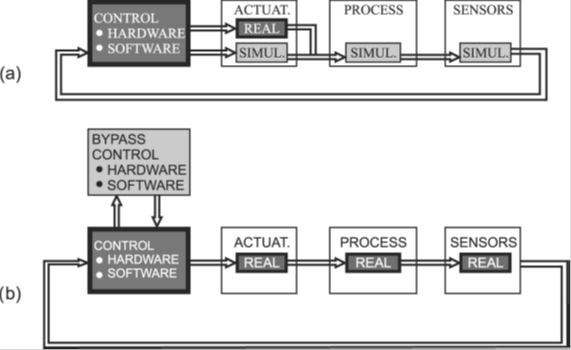 The reason is that actuators and the control hardware very often form one integrated subsystem or that actuators are difficult to model precisely and to simulate in real time. (The use of real sensors together with a simulated process may require considerable realization efforts, because the physical sensor input does not exist and must be generated artificially.)

In order to change or redesign some functions of the control hardware or software, a bypass unit can be connected to the basic control hardware. Hence, hardware-in-the-loop simulators may also contain partially simulated (emulated) control functions.

The advantages of the hardware-in-the-loop simulation are generally:

a.       Design and testing of the control hardware and software without operating a real process (“moving the process field into the laboratory”);

c.       testing of the effects of faults and failures of actuators, sensors, and computers on the overall system;

d.      operating and testing of extreme and dangerous operating conditions;