In Europe and Russia, between seventeenth and nineteenth centuries, many important devices were invented that would eventually contribute to mechatronics.

Cornelis Drebbel (1572–1633) of Holland devised the temperature regulator representing one of the first feedback systems of that era. Subsequently,

Dennis Papin (1647–1712) invented a pressure safety regulator for steam boilers in 1681. Papin’s pressure regulator is similar to a modern-day pressure-cooker valve. The first mechanical calculating machine was invented by Pascal in 1642 [8].

The first historical feedback system claimed by Russia was developed by Polzunov in 1765. Polzunov’s water-level float regulator, illustrated in Fig. employs a float that raises and lowers in relation to the water level, thereby controlling the valve that covers the water inlet in the boiler. 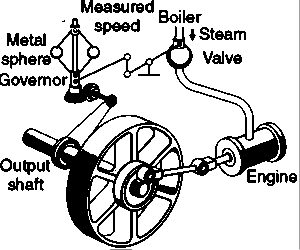 Employing a measurement of the speed of the output shaft and utilizing the motion of the flyball to control the valve, the amount of steam entering the engine is controlled.

As the speed of the engine increases, the metal spheres on the governor apparatus rise and extend away from the shaft axis, thereby closing the valve. This is an example of a feedback control system where the feedback signal and the control actuation are completely coupled in the mechanical hardware.

These early successful automation developments were achieved through intuition, application of practical skills, and persistence.

The next step in the evolution of automation required a theory of automatic control.

The precursor to the numerically controlled (NC) machines for automated manufacturing (to be developed in the 1950s and 60s at MIT) appeared in the early 1800s with the invention of feed-forward control of weaving looms by Joseph Jacquard of France. In the late 1800s, the subject now known as control theory was initiated by J. C. Maxwell through analysis of the set of differential equations describing the flyball governor. Maxwell investigated the effect various system parameters had on the system performance.

The evolution of automation would accelerate significantly in the twentieth century.