The field of microelectronics has changed dramatically during the last two decades and digital technology has governed most of the application fields in electronics.

The design of digital systems is supported by thousands of different integrated circuits supplied by many manufacturers across the world.

This makes both the design and the production of electronic products much easier and cost effective. The permanent growth of integrated circuit speed, scale of integration, and reduction of costs have resulted in digital circuits being used instead of classical analog solutions of controllers, filters, and (de)modulators.

Digital integrated circuits are designed to be universal and are produced in large numbers. Modern integrated circuits have many upgraded features from earlier designs, which allow for “user-friendlier” access and control. As the parameters of Integrated circuits (ICs) influence not only the individually designed IC, but all the circuits that must cooperate with it, a roadmap of the future development of IC technology is updated every year. From this roadmap we can estimate future parameters of the ICs, and adapt our designs to future demands.

The relative growth of the number of integrated transistors on a chip is relatively stable. In the case of memory elements, it is equal to approximately 1.5 times the current amount.

In the case of other digital ICs, it is equal to approximately 1.35 times the current amount. In digital electronics, we use quantities called logical values instead of the analog quantities of voltage and current.

Logical variables usually correspond to the voltage of the signal, but they have only two values: log.1 and log.0. If a digital circuit processes a logical variable, a correct value is recognized because between the logical value voltages there 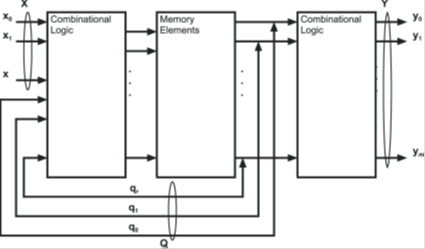 Digital circuits are composed of logic gates, such as elementary electronic circuits operating in only two states. These gates operate in such a way that the resulting logical value corresponds to the resulting value of the Boolean algebra statements. This means that with the help of gates we can realize every logical and arithmetical operation.

These operations are performed in combinational circuits for which the resulting value is dependent only on the actual state of the inputs variables. Of course, logic gates are not enough for automata construction.