There is one last topic that should be mentioned in this section on inputs and outputs. Mechatronic systems often work with other systems in a network.

Data and commands are thus transmitted from one system to another. While there are many different protocols, both open and proprietary, that could be mentioned about this networking, two will serve our purposes.

The first is the manufacturing automation protocol (MAP) that was developed by General Motors Corporation. This system is based on the ISO Open Systems Interconnection (OSI) model and is especially designed for computer integrated manufacturing (CIM) and multiple PLCs.

The second is the controller area network (CAN). This standard for serial communications was developed by Robert Bosch GmbH for use among embedded systems in a car. 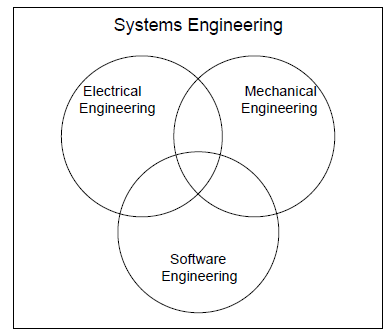 Systems engineering is the systems approach to the design and development of products and systems.

This is part of the implementation of concurrent engineering. As also shown by the figure, software is an equal partner in the development of a mechatronic system. It is not an add-on to the system and it is not free, the two opinions that were sometimes held in the past by engineering management.

While the phrase “Hardware adds cost, software adds value” is not entirely true either, sometimes software engineers felt that their competency was not given equal weight with the traditional engineering disciplines.

And one last comment—many mechatronic systems are safety related, such as an air bag system in a car. It is as important for the software to be as fault tolerant as the hardware.