A continuously-variable transmission (CVT) is one whose gear ratio (speed ratio) can be changed continuously —that is, infinitesimal increments or infinitesimal resolution—over its design range. Because of perceived practical advantages of a CVT over a conventional fixed-gear-ratio transmission, there has been significant interest in the development of a CVT that can be particularly competitive in automotive applications.

For example, in the Van Doorne belt, a belt-and-pulley arrangement is used and the speed ratio is varied by adjusting the effective diameter of the pulleys in a continuous manner. The mechanism that changes the pulley diameter is not straightforward. Further, belt life and geometry are practical limitations. An early automotive application of a CVT used the friction-drive principle.

This used a pair of friction disks, with one rolling on the face of the other. By changing the relative position of the disks, the output speed can be changed for a constant input speed.

All friction drives have the advantage of overload protection, but the performance formance will depend on the frictional properties of the disks, and will deteriorate with age.

Thermal problems, power loss, and component wear can be significant. Also, the range of speed ratios will depend on the disk dimension, which can be a limiting factor in applications with geometric constraints.

The infinitely-variable transmission (IVT), developed by Epilogies Inc. (Los Gatos, CA), is different in principle to the other types of CVTs mentioned.

The IVT achieves the variation of speed ratio by first converting the input rotation to a reciprocating motion using a planetary assembly of several components (a planetary plate, four epicyclic shafts with crank arms, an overrunning clutch called a mechanical diode, etc.), then adjusting the effective output speed by varying the offset of an index plate with respect to the input shaft, recovering the effective rotation of the output shaft through a differential-gear assembly.

One obvious disadvantage of this design is the large number of components and moving parts that are needed.

Now we will describe an innovative design of a continuously-variable transmission that has many advantages over existing CVTs. In particular, this CVT uses simple and conventional components such as racks and a pinion, and is easy to manufacture and operate. It has few moving parts and, as a result, has high mechanical efficiency and needs less maintenance than conventional designs. 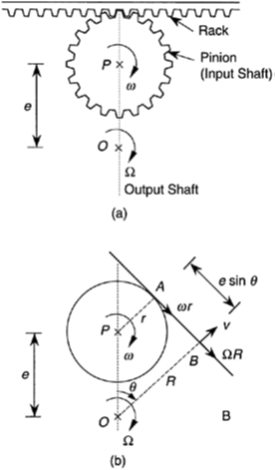 Consider the rack-and-pinion arrangement shown in Figure (a). The pinion (radius r) rotates at an angular speed (w) about a fixed axis (P).

If the rack is not constrained in some manner, its kinematics will be indeterminate. For example, as in a conventional drive arrangement, if the direction of the rack is fixed, it will move at a rectilinear speed of wr with zero angular speed. Instead, suppose that the rack is placed in a housing and is only allowed a rectilinear (sliding) lateral movement relative to the housing, and that the housing itself is “free” to rotate about an axis parallel to the pinion axis, at O.

Let the offset between the two axes (OP) be denoted by e.