In linear-graph models, system inputs are represented by source elements. An ideal force source (a through variable source) is able to supply a force input that is not affected by interactions with the rest of the system.

The corresponding relative velocity across the force source, however, is determined by the overall system. A forcing function ƒ (t) applied at a point.

The arrowhead indicates the direction of the applied force when ƒ (t) is positive. Note that it also determines the positive direction of power.

The reaction on the source would be in the opposite direction. It is possible for velocity to be a source (input),

The sign is placed to indicate the point of action, and—for the point of reference. An ideal velocity source (across-variable source) supplies a velocity input independent of the system to which it is applied. The corresponding force is, of course, determined by the system. 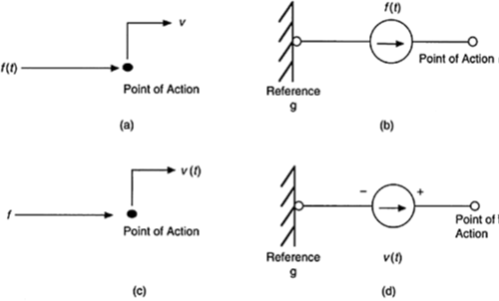 graph representation of a velocity source.

Source elements can serve as means of inhibiting interactions between systems. Specifically, it follows from the definition of an ideal source that dynamic behavior of a system is not affected by connecting a new system in series with an existing force source or in parallel with an existing velocity source.