An ideal gyroscope is an example of a mechanical gyrator. It is simply a spinning top that rotates about its own axis at a high angular speed w (positive in x direction), assumed to remain unaffected by other small motions that may be present.

If the moment of inertia about this axis of rotation (x in the shown configuration) is J, the corresponding angular momentum is Jw.

If a velocity ui is given to the free end in the y direction (which would result in a force ƒi at that point, whose positive direction is also taken as y) the corresponding rate of change of angular momentum would be Jwui/L about the positive y-axis. Note that ui/L is the angular velocity due to ui.

By Newton’s second law, to sustain this rate of change of angular momentum, it would require a torque equal to Jwui/L in the same direction. 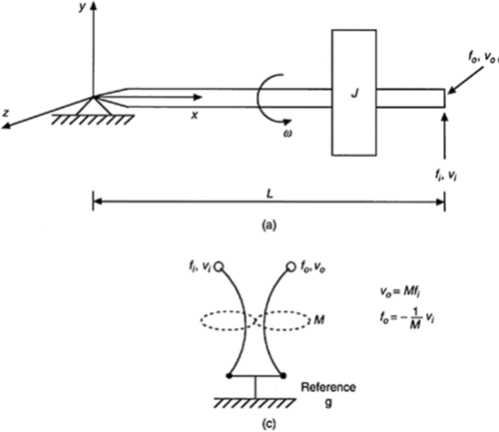